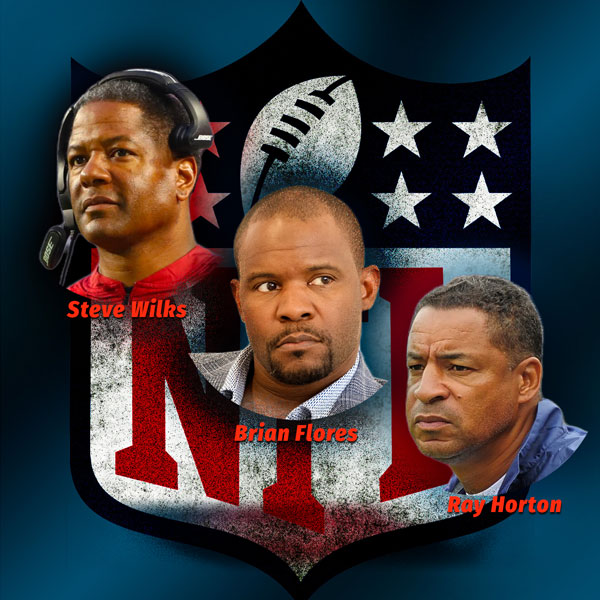 Joint statement from Brian Flores’ co-counsel, John Elefterakis and Douglas H. Wigdor, regarding Coaches Steve Wilks and Ray Horton joining race the discrimination class action against the NFL and various teams: “It is an honor to represent three admired and successful coaches who, by becoming named plaintiffs in this race class action, have demonstrated great courage to stand up against the NFL. While the NFL may hire outside consultants, make minor rule changes, and pander to various interest groups, real and enduring change can only be accomplished through the appointment of a court ordered monitor as the NFL has demonstrated time and time again that it is incapable of policing itself.”

EEP Law and Wigdor Law, represent Brian Flores in connection with his race discrimination class action against the NFL and various teams.

As alleged in the amended complaint, in 2018 Mr. Wilks was discriminated against by the Arizona Cardinals in a manner consistent with the experiences of many Black coaches. Mr. Wilks was hired as a “bridge coach” and was not given any meaningful chance to succeed. He was unfairly and discriminatorily fired after just one season. His white GM, who made poor personnel decisions and was convicted for a DUI during the offseason, was given a contract extension. Mr. Wilks was replaced by a white coach, Kliff Kingsbury, who had no prior NFL coaching experience and was coming off multiple losing seasons as a Head Coach at Texas Tech. Mr. Kingsbury, armed with quarterback Kyler Murray, has been given a much longer leash than Mr. Wilks and, to his credit, has succeeded. That said, Mr. Wilks, given the same opportunity afforded to Mr.Kingsbury, surely would have succeeded as well. The allegations pertaining specifically to Mr. Wilks are located at ¶¶ 227-263 of the amended complaint.

Mr. Flores and Mr. Wilks are joined by Mr. Horton. Mr. Horton was a long time NFL coach and Defensive Coordinator when he was interviewed for the Tennessee Titans Head Coach position in January 2016. This turned out to be a completely sham interview done only to comply with the Rooney Rule and to demonstrate an appearance of equal opportunity and a false willingness to consider a minority candidate for the position. Indeed, the Titans’ all-white ownership and management ultimately hired Mike Mularkey, a white candidate, for the Head Coach position. Years later, in 2020, Mr. Mularkey admitted in a podcast interview that the Titans, “[T]old me I was going to be the head coach in 2016, before they went through the Rooney rule. And so I sat there knowing I was the head coach in 2016, as they went through this fake hiring process knowing, knowing a lot of the coaches that they were interviewing, knowing how much they prepared to go through those interviews, knowing that everything they could do and they had no chance to get that job.” The allegations pertaining specifically to Mr. Horton are located at ¶¶ 264-284 of the amended complaint. Listen to the podcast at 25:02.

More details from the amended complaint.

In addition to the allegations made by the new Plaintiffs, Mr. Flores’ allegations have been expanded upon, including reference to a December 4, 2019 memorandum he authored memorializing Mr. Ross’ desire to have Miami lose games. The memorandum is discussed at ¶ 166 of the amended complaint.

The amended complaint also builds out on the statistics surrounding the hiring, retention and termination of Black coaches and executives, and contains a number of statistical analyses that establish egregious and statistically significant racial disparities when it comes to the hiring and termination of such individuals. These statistics, analyses and studies can be found at ¶¶ 121-148 of the amended complaint.

Finally, the amended complaint also details the NFL’s utter unwillingness to subject itself to any oversight and accountability when it comes to discriminatory hiring practices, as well as its sham public relations maneuvers following the filing of this lawsuit. The latter includes the creation of a “diversity advisory committee.” This committee, which has only six members, has on it two practicing lawyers, both of whom make a living defending employers against claims of discrimination. One of those lawyers even defended McDonalds against race discrimination claims as co-counsel to Loretta Lynch, Esq., the attorney that the NFL has hired to defend itself in this action. There is not one person on the committee that has spent their career representing victims of discrimination. Moreover, this committee has absolutely no power or authority – it is simply going to make private recommendations to the NFL. Clearly, the “diversity advisory committee” does not in any way demonstrate a true commitment to change, oversight and accountability.

Brian Flores: “I continue to be humbled by the outpouring of support in connection with my claims against the NFL and applaud Steve Wilks and Ray Horton for standing up against systemic race discrimination. Their claims are the unfortunate reality of the problems facing Black coaches in the NFL which our collective hope in this case is to end once and for all.”

Steve Wilks: “When Coach Flores filed this action, I knew I owed it to myself, and to all Black NFL coaches and aspiring coaches, to stand with him. This lawsuit has shed further important light on a problem that we all know exists, but that too few are willing to confront. Black coaches and candidates should have exactly the same ability to become employed, and remain employed, as white coaches and candidates. That is not currently the case, and I look forward to working with Coach Flores and Coach Horton to ensure that the aspiration of racial equality in the NFL becomes a reality.”

Ray Horton: “I am proud to stand with Coach Flores and Coach Wilks in combatting the systemic discrimination which has plagued the NFL for far too long. When I learned from Coach Mularkey’s statements that my head coach interview with the Titans was a sham, I was devastated and humiliated. By joining this case, I am hoping to turn that experience into a positive and make lasting change and create true equal opportunity in the future.” 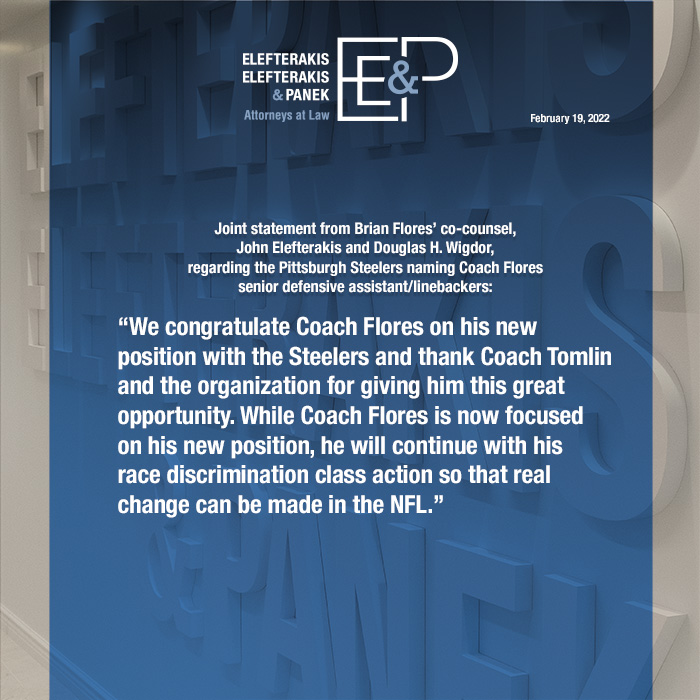 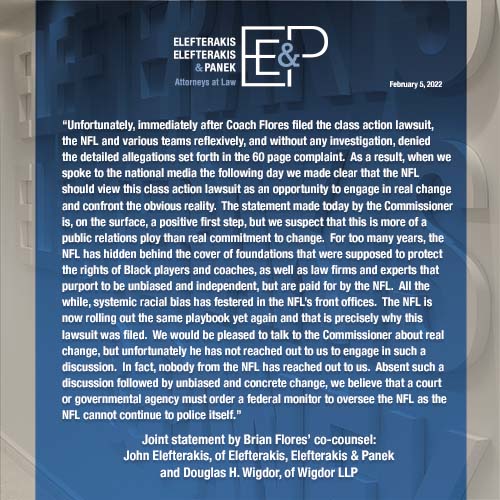 “Unfortunately, immediately after Coach Flores filed the class action lawsuit, the NFL and various teams reflexively, and without any investigation, denied the detailed allegations set forth in the 60 page complaint. As a result, when we spoke to the national media the following day we made clear that the NFL should view this class action lawsuit as an opportunity to engage in real change and confront the obvious reality. The statement made today by the Commissioner is, on the surface, a positive first step, but we suspect that this is more of a public relations ploy than real commitment to change. For too many years, the NFL has hidden behind the cover of foundations that were supposed to protect the rights of Black players and coaches, as well as law firms and experts that purport to be unbiased and independent, but are paid for by the NFL. All the while, systemic racial bias has festered in the NFL’s front offices. The NFL is now rolling out the same playbook yet again and that is precisely why this lawsuit was filed. We would be pleased to talk to the Commissioner about real change, but unfortunately he has not reached out to us to engage in such a discussion. In fact, nobody from the NFL has reached out to us. Absent such a discussion followed by unbiased and concrete change, we believe that a court or governmental agency must order a federal monitor to oversee the NFL as the NFL cannot continue to police itself.” 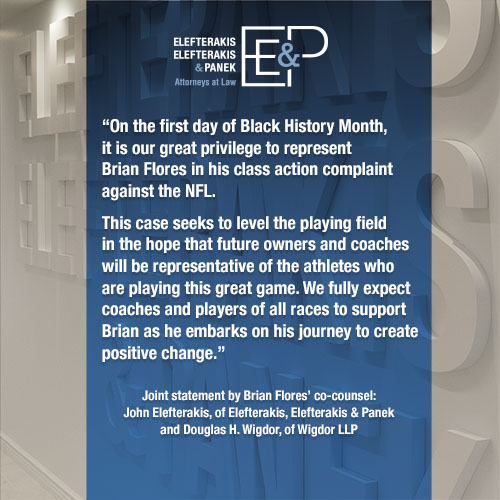 “On the first day of Black History Month, it is our great privilege to represent Brian Flores in his class action complaint against the NFL.

This case seeks to level the playing field in the hope that future owners and coaches will be representative of the athletes who are playing this great game. We fully expect coaches and players of all races to support Brian as he embarks on his journey to create positive change.”

Be sure to watch another powerful interview with Brian Flores on HBO’s Real Sports with Bryant Gumbel https://t.co/MxlVpP62MQ

“Leadership is about service…”
Get ready for a powerful Brian Flores interview by Jay Williams of ‘The Limits’, for NPR, to be aired tonight
—-#istandwithFlores pic.twitter.com/GDRE8MRVIX