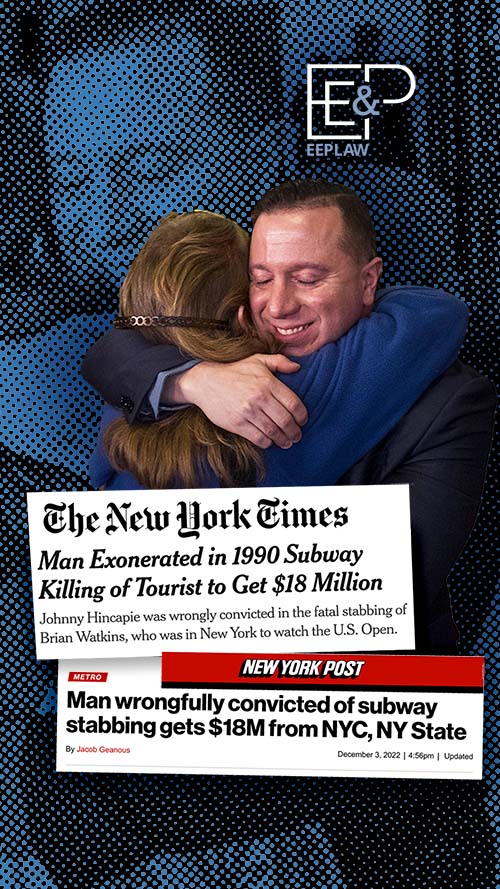 Among the Largest Wrongful Conviction Settlements in New York History.

Johnny Hincapie was only 18 years old and had never been arrested when he was brought to the Midtown North Precinct by seasoned homicide detectives and coerced to falsely confess to one of the most notorious crimes of this City’s darkest era – the Labor Day 1990 stabbing of “Utah Tourist” Brian Watkins on a Midtown Subway platform. Despite his immediate recantation of the false confession and extensive evidence of his innocence, Mr. Hincapie was wrongly convicted of felony murder and sentenced to 25-to-life in prison. Before his exoneration in 2015, Mr. Hincapie served 25 years, 3 months and 8 days for a crime in which he had no involvement.

Mr. Hincapie explained, “What happened to Brian Watkins was tragic and I have never forgotten the loss his family suffered. I am fortunate that my innocence has finally been acknowledged by my city and my state and I look forward to the next chapter of my life with my family.”

Baree N. Fett noted that “Nothing can possibly compensate Mr. Hincapie for the decades of lost liberty and stolen youth he suffered, but we are happy that Johnny can now begin to rebuild from this unspeakable tragedy.” According to Gabriel P. Harvis, “With trial approaching, it became increasingly clear that our firm was ready to present insurmountable evidence that not only spoke to Johnny’s innocence, but to the wonderful man he became despite this injustice.”

The firm’s founding partner John Elefterakis stated, “It was a privilege and an honor to represent Johnny Hincapie and to use our platform to deliver justice.”